Going on a Dragon Hunt

As silently as I could I slid out of my car. The hot, moist air lapped over my air-conditioned body like the hot breath of a large animal. This was my second attempt at trying to locate the beasts. Through the morning haze I detected movement. Bright colored objects reflected in the early morning glow. A smile touched the corners of my lips. I had found them. As I ventured closer, I saw a crowd with matching shirts eagerly watching two burly men wrestling with the first beast. The nearest man had his back to me. He was grasping the front of the beast and aligning it into position. The second rode the back of the sleek, yellow body, calmly waiting his chance to make his move. Then it happened. With an echoing, deep, rumble the final binding rope was released and the two men lurched together with the beast, subduing it gracefully into the water. A cheer went up as Lansing’s first Dragon Boat entered the Grand River. Without even a pause the men quickly went for the second dragon. The heavy utility diesel truck slowly backed the dragon on the trailer into the water once again. Within minutes the second dragon was released from its binds and floating in the river. The two dragons; sister racers, would become the center of attention for the next 30 hours. This Labor Day weekend, coinciding with the Mosaic Festival, Lansing hosted its first ever Dragon Boat Racing.
With both vessels river washed and assembled it was time to move them into position for the next two days. The eager volunteers, donning life jackets and void of anything not water proof, climbed aboard each dragon per instructions. With each vessel commanded by a masculine instructor they began their voyage down the Grand River to the docking area and Athlete Village.

Later that evening as dusk rolled in another crew of volunteers, wearing dark clothing swiftly boarded the two 40’ boats. In coordinated strokes the two dragons soon rested side by side in the center of the river. After a few words from officials and a sponsor read through, the opening ceremony to cleanse the river in preparation for the next morning races began. All guests resting along the banks sat in awe and delight as the dragons became fire-breathing. 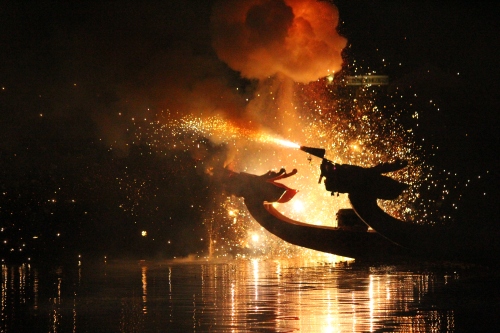 The next morning, earlier than most arise on a Sunday, found the river banks full of activity. The empty tents of Saturday were today packed with eleven teams of up to 24 crew mates. Each team was decorated in a specific colored t-shirt, many with creative names; Star Oars, Draggin Ass and Dirty Oars to name a few. Although many looked unkempt in the morning light, all had a glint in their eye and an eagerness to start the races. Throughout the day each team took turns racing each other; at first time trials, then actual heats. At the end of the races only one team was the winner. But really, at the end of another exciting, well organized Lansing event, we are all winners.

This entry was posted in Uncategorized. Bookmark the permalink.

2 responses to “Going on a Dragon Hunt”