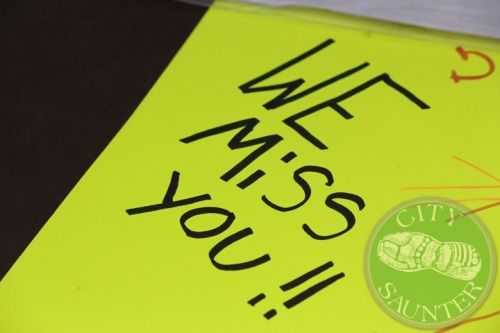 There’s a call that too many get. It’s the call that changes your world forever. My call came in at 11:36pm July 18, 1989. It was my grandma on the other end of the line. I could hear her tear hoarse voice softly speak into my ear; “Walter was killed in a car accident”. My 17 year old brother was dead. Even at 19 I knew my world would never be the same.

Today I stood among a crowd filled with moms, sisters, brothers, fathers, uncles, aunts, grandparents and friends who either received that life changing call or had to make that call. Their call, like mine, told them that someone they loved had been taken from them too early; ripped from their lives forever. Unlike my loss, theirs was from an act of violence committed by another person. Whatever reasoning or lack thereof, that had led to its commencing, this one singular act of violence doesn’t stop there. It ripples out over and through those affected, sometimes in tidal waves and sometimes in slow rhythmic pulses, but always there; forever. Today’s walk was designed to rally people behind the idea of peace. People present spoke of respecting each other. They spoke of education. They spoke about loving each other. They professed that it’s the civil group’s actions that carry the most weight; working with law enforcement and speaking up when something seems amiss. Mostly they spoke of the aching hole left in their hearts. Yet I also witnessed a strength in these people who seemed stronger than humanly possible. I saw two moms each holding the other as if letting go would result in falling over. They appear fragile and one, in fact, when faced with speaking of her daughter’s murder buries her face into her friend’s shoulder. This only strengthens the words flowing out of the other mother’s mouth whose son was murdered as well. She confidently speaks for both families. 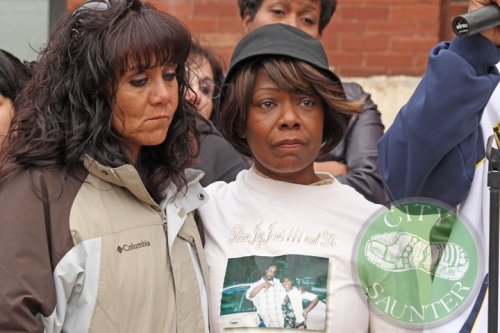 I saw John Edmond, the father of Amaia Edmond stand beside the humble man whose body now holds the liver of his deceased daughter; both so thankful that the little girl blessed so many people in her short time on earth. 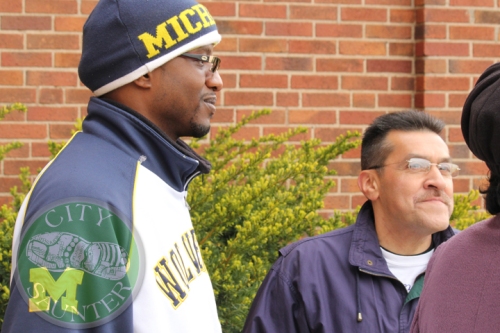 I heard the new police captain, Daryl Green speak of his loss of a close uncle, a brother really, he tells us, after he was shot in New York. Later I witnessed him wiping away tears while listening to the tragedies experienced by others present. I listened as Council woman Jody Washington, she herself a victim of violence, name the 20 people in her ward that were homicide victims in the last four years.

I heard the angelic, solo voice of a young girl sing The Star Spangled Banner for all those gathered in the parking lot of Resurrection Church.

This crowd of over 100 turned out on a cold Saturday afternoon because they felt strongly that something should be done about the violence in the Lansing community. They represent a wave, that slow and steady wave that will wash over the city with hope and peace.

Keep the Peace, Stop the Violence.