I was ready to proclaim domination over the east side of Lansing. I was rechecking my map to guarantee I had in fact walked most of the eastern side of Lansing when I saw it. I checked again. I pulled out another map. It was on there too. I opened Google Maps. It must be true now. There was a section on the eastern side of 127, my ultimate eastern edge boundary guide line, that was in, without a doubt, part of Lansing. It was positioned east of 127, north of Grand River and west of Coolidge. I don’t know how I skipped over it! On my way into town for Lunch with a Purpose I stopped at the old Holiday Lanes bowling alley (it’s being renovated) on Grand River and headed to this almost East Lansing section. 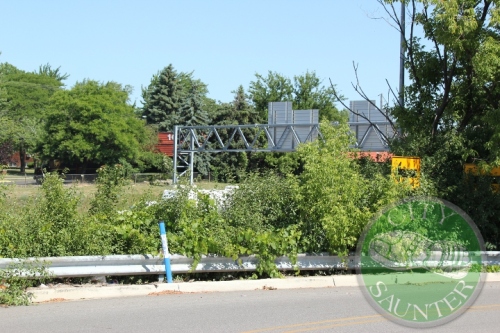 Once within the residential part of this neighborhood, it was obvious that this neighborhood was at one point in time the conjoined twin sister of Groesbeck. The homes are very similar in style with large colonials with pillars or the typical split level built over a two car garage. As with the Groesbeck area, a section of this neighborhood also pays for the state’s advancement by having a 70 mph highway in its backyard. This side didn’t get the 12 foot grey colored walls like the other side of 127. It’s a quaint little neighborhood, yet quiet it’s not. This surgical separation that allowed US 127 to run through the middle of a decent neighborhood abscised this east side as the smaller, less protected, more isolated section . For some the isolation from most of the city creates an almost retreat feeling. Yards grow right up to the road as there are no sidewalks in this section. However, very few cars passed me while I walked in the road. The lack of sidewalk wasn’t really a concern until I walked out onto the very busy Coolidge Rd; the Lansing side had no sidewalks. Just across the street, on the East Lansing side, a utility worker spent the entire time I walked cleaning and edging the sidewalk. There was a worn patch in the grass where I walked that showed evidence that I wasn’t the only walker on this path. It might have been those trying to get to the bus stop just north of Grand River.

Slipping back onto the inner neighborhood streets I again noticed how undisturbed this area looked. In this section the trees were gloriously over grown and provided a wonderful canopy, unlike many city street trees that have been ruined by recent road and sewer repairs deeper in the heart of Lansing. 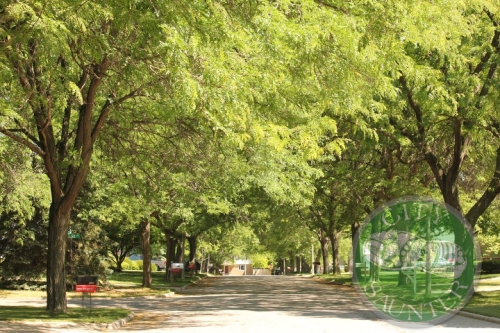 So this is the eastern edge of Lansing and I walked it, finally! Now that I have sought out this section I have almost walked all the east section bordering the eastern edge to Clemens and south to 496. There is one little section south of Kalamazoo and north of 496 I haven’t completed yet, but I read a great article about the Land Bank offering parcels of land in this area for Urban Gardens. I think I’ll check that out soon!