When I lived in Richmond, Virginia from 1992 until 1996 we often experienced these summer days of excruciating and unbearable heat. It would generally start the third week of July and run the second week of August. Sometimes it was all of July and all of August. We would have record 100 degree days for a week and more days of the month in the 90’s than in the 80’s. It was incredibly similar to what Lansing has been experiencing this summer. Also taking into consideration the lack of rain and this summer is a record breaker on multiple fronts. Summer can be frustrating in many respects. The kids trade in their perfectly scheduled routines for late nights, not so much late mornings and infrequent RRR. Despite great hopes every summer to continue with somewhat of a scholastic menu it somehow always goes down the drain. Soon the day in and day out guilt gets ever greater that I am not spending nearly enough time creating fun activities with my kids. So today I was going to change that. Yes, I knew the high for the day was supposed to reach 90, once again. My thinking was if I got us out early enough we could return before it was too bad. Somehow, though I found myself forcing the twins to shower and barely getting them into the car before 2 p.m. It was already 86. It’s okay I thought, I was planning to stop at a park. A park always makes everything okay. We parked at McDonalds on Larch. I bought them each $1.00 ice cream cones (didn’t these use to be $.25??) and an ice tea for myself. Then we headed east through the neighborhood. At first it was not too bad. I could tell after one block though that the twins weren’t going to put up with too much walking. After going around one block I decided to head straight to Gier Park Elementary to let the kids play. Even though this area has two schools, a community center, a baseball field, two additional parks, and a BMX track there was hardly anyone out there. The kids played a little as I took some photos like the 4 square area that I actually remember playing on when I was their age. Without many trees we quickly became over hot. The twins tried to enjoy themselves but I could see the fatigue setting in. They had eyed the other park to the north and wanted to try that one out too. So we made our way through the baseball fields. 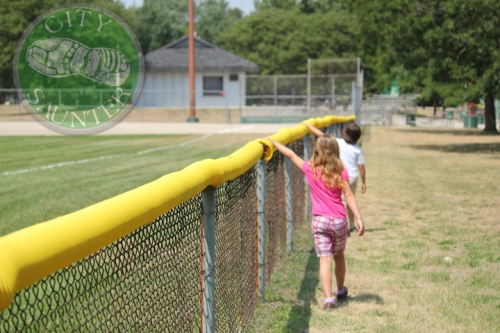 I remember as a young person riding to these fields in the summer. Some of our friends would be playing there and it was a great place to socialize. Not today though, as there was no one there. 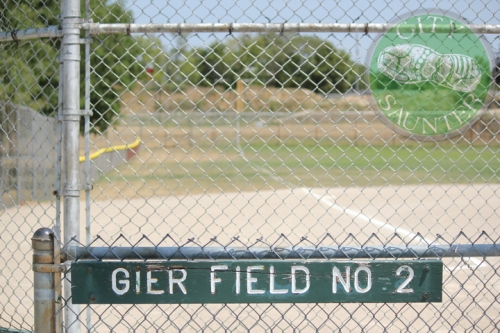 The parking lot was scattered with a few parked cars which always makes me wonder, what are those people doing? There was one couple that drove in and it was quite obvious what they were doing. I tried to not draw attention to them. At this park the twins quickly scaled a 6 foot fake rock. Once on the top, my just learning to read 6 1/2 year olds began reading the words they could make out; “suck my…”; oh my!! It was time to move on. 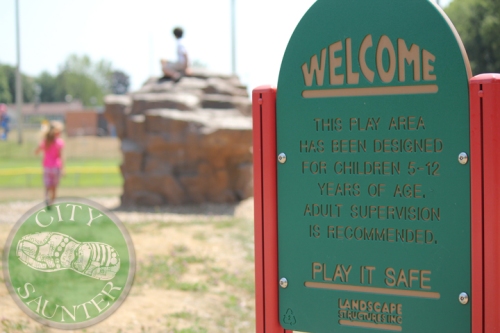 I suppose graffiti cleaning has been cut out of the budget years ago. By now Ellie is dragging. Her face is as pink as her shirt and I knew getting back to the car was going to be a challenge. We passed the BMX track and watched three young guys run the track once. 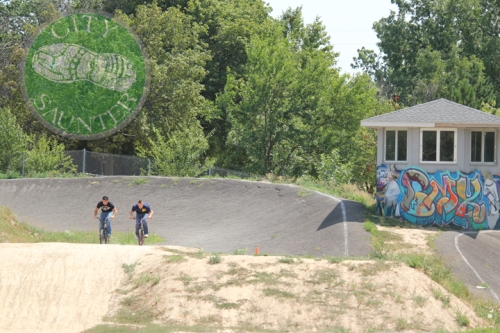 I suppose it’s too hot for even riding bikes. We crossed 27 (Larch for the non North Side folks) and took a non walked road back to the car. Ellie insisted I was making them walk 10 miles. It ended up being almost 2 miles on a 90 degree day. Now I know why they call it dog days, as all we’ve done since getting home is lay around the house. It’s a sad, sad summer when it’s even too hot to play.

This entry was posted in Uncategorized and tagged City Saunter, GierPark, Lansing, Michigan, north side, parks, walking. Bookmark the permalink.