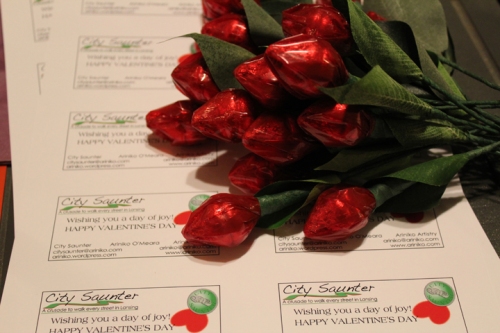 Carefully I planned out my attire for this walk; red corduroys with matching top, my daughter’s pink poncho with hearts and peace signs all over it and a pink bow in my hair. I wanted to wear a sign on my back that said “Honk if you #LoveLansing” but Pat thought it was too much. The night before I had finished creating 24 Hershey Kiss rose buds. Today I planned to pass them out as I walked one of my final east side routes. I’d learned before that giving away things to people isn’t as easy as you’d think. A few months back I desperately tried to hand out 5 Biggby cards. People tend to be wary of a stranger walking around asking if you like coffee. I knew with this give away I would look the part and act the part; happy City Saunterer (it’s a noun now) dressed like a Valentine Card, handing out homemade treats. It mostly worked. I had a slow start as the streets I needed to walk were residential. As I worked my way closer to the busier streets I began to find more and more people to flower/candy bomb.
Here’s my route:
http://www.mapmyrun.com/workout/232707078
My recipients:
1. Lady walking her dog. The dog growled at me.
2. A man in a wheelchair on his front porch. He was feeding about 5 squirrels peanuts.
3. The mailman on Allen St.
4. I placed one on a set of delivered packages on a decorated home on Allen St.
5 & 6 I crossed the street where a man and woman whose disabled car left them abandoned in Lansing from out of town. I told them I couldn’t fix their car but I could try to cheer them up. It did.
7 A woman walking out of Ronald McDonald House.
8 & 9 Two girls walking down the street. Their response was ; “How sweet”.
10. A man walking on Kalamazoo St.
11 A young girl on Jones
12. A young guy on Holmes
13. Another guy on Pennsylvania
14 A girl walking down Pennsylvania with heart shaped balloons trailing behind her. She also had a package in her arms. When I gave her the flower she announced that it was also her birthday! What a treat!
15. Lady carrying packages into Rite Aid
16. & 17 Two girls getting on the bus on Michigan Ave.
18 A man hurrying across the street from Sparrow. He had a red coat on. I couldn’t resist.
19 Burcham Hill driver
20. A well dressed woman waiting outside Sparrow Professional Center
21 & 22 A couple also waiting outside the Sparrow Professional Center
23 & 24 A couple waiting for the bus down the road from Sparrow.
What a great day of giving!