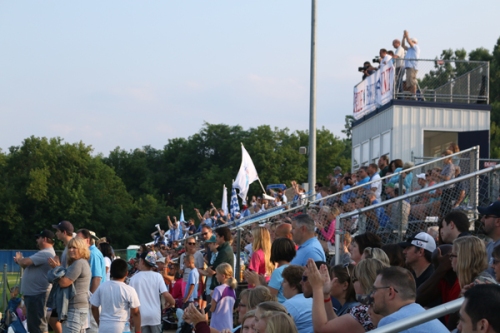 Sometimes in Lansing you come across something new and exciting without really knowing how you haven’t known about it before. Sometimes it’s a passing blip on your Facebook wall. Sometimes a friend in going and mentions it to you. Sometimes someone you know creates the entire branding for a new sports team and his son plays on their reserve team. Even this last part didn’t get me fully interested in this new team. It wasn’t until I was asked to write a “break out” piece for a local paper about Lansing United, that I finally took the time to really find out about this new sports team. 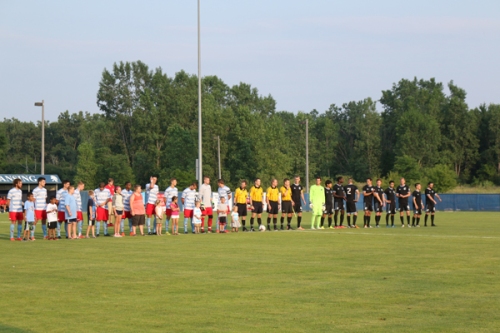 Lansing United is the newest members of the National Premier Soccer League. The NPSL is the fastest growing national soccer league in the United States. Lansing United is an expansion team in the Great Lakes Conference. Last week this team came in first place in the Great Lakes Conference and moved on to the playoffs. There were four teams that got to play in the Midwest Region Playoffs. The game I was asked to cover was Saturday’s semi final game. Lansing United played against the Minnesota United Reserves.

I really didn’t know what to expect when I got there but I thought I would wing it. I had looked up the address before leaving. The home games are all held at the East Lansing Soccer Complex. I didn’t even know this place existed.  I had a brief memory of this place from about 6 years ago as a dirt pile at the end of a new walking trail. It’s amazing how quickly things can grow in this area.

Walking up the walkway I already could feel the intense playfulness atmosphere. There were children running around passing a soccer ball between them. In fact almost every kid had a ball. There was a pizza truck parked to the side of the pavilion and stacks of pizzas were being carried into the pavilion. There were lots of people dressed in bright baby blue vests. These are the volunteers that answered questions, watched the gate and sold you tickets. It’s very professional looking.

Dave Ellis, the media director said that without the support of so many, this would not have come together as well as it had. He wants to thank everyone for all their support.

Inside the gate the stands were full. I found out later from the media director that the stands were full for every game. Not only were the stands full but a good chunk of grass had folks sitting on it. I would say there were close to 1000 people watching this game.I quickly made my way to the very verbose cheering section. I had been told to get a photo of them by Camron Gnass whose creative studio, Traction created the branding for the team. The sea of blue was easy to spot as well as the constant singing, chanting and yelling that came from this section. And if that didn’t draw me down there the smoke canisters and flying flag would have.

Sons of Ransom- The #1 Supporters of Lansing United. Their name comes from Ransom E. Olds.

I found a place nearby and watched as the game began. The last time I watched a soccer game was when my boys were on a team. It’s been a long time. I have never watched adults play soccer. I was instantly amazed by the stamina, agility and speed of these players. The maneuvering of the ball with their feet reminded me of ballet, until they pulled that leg back and gave that ball a full on kick. There is a fascinating balance between the precise positioning of the ball with the feet and then the aggressive full on assault to get that ball into the goal. It really is amazing to watch. 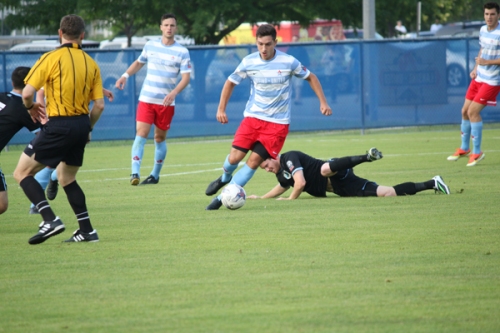 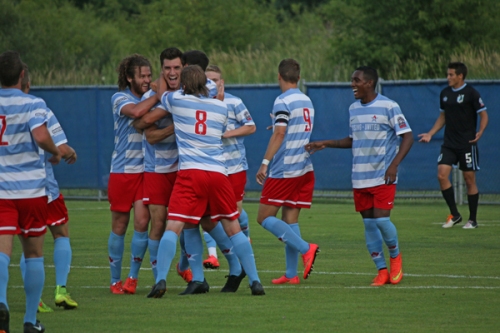 After getting some really great shots I left. I found out through social media they had won the semi final game and that meant they would play Sunday as well in the finals. 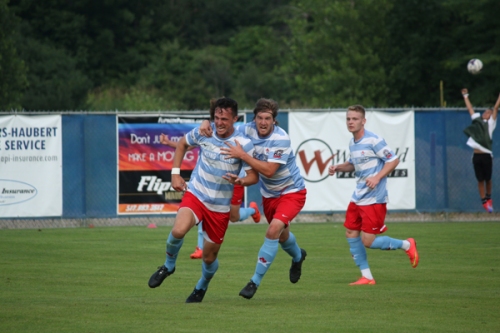 I brought my family back for that one and we watched this inaugural Lansing team play at an East Lansing sports field and win the Midwest Region Championship.

I am so glad Lansing has another win.

The twins posing in the street in front of the Capitol Lansing, Michigan Fourth of July parade
© Ariniko Artistry

Last year we had family out for the fourth of July and we skipped heading into Lansing for any festivities. To be honest in 2012 when we attended both the parade and fireworks display some freaky things happened that made me not want to come back. Although the parade was fine in 2012 it was hot out making sitting through the parade almost painful. This year it was almost a tad, a smidge, an iota chilly. Luckily my husband led us to the perfect, sunny, photographic location. 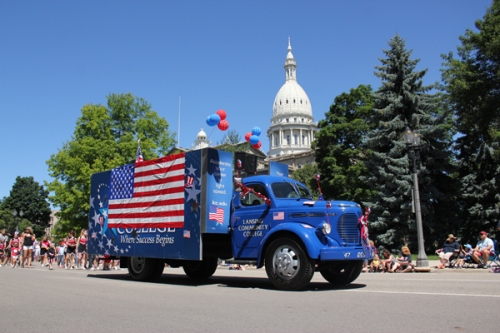 We sat directly in front of the closed off parking ramp on Allegan. Every photo I took was back dropped with the Capitol and a gorgeous Mid Michigan blue sky. 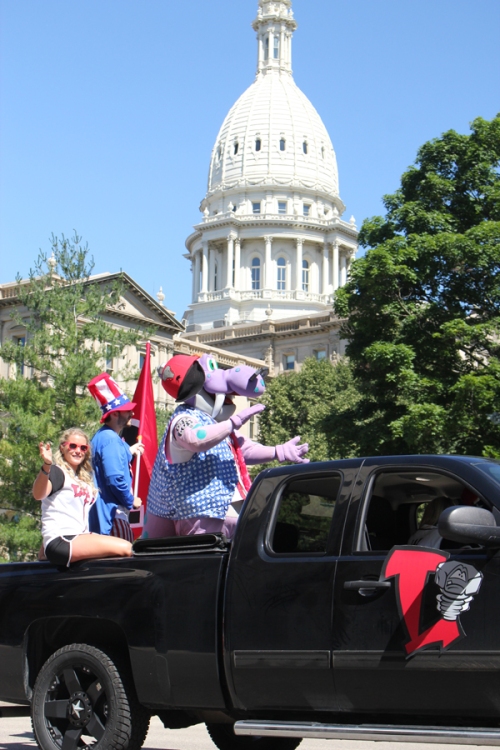 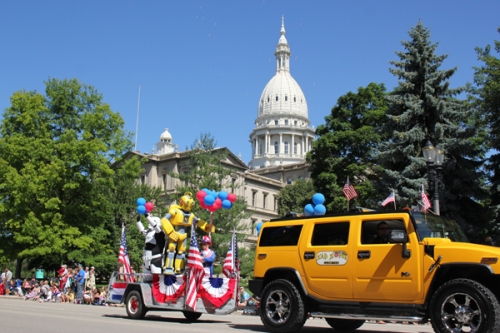 In 2012, although there was a good enough attendance, the participants within the parade seemed thin. By that I mean each group had only a few people representing them. There was a huge difference this year where each specific group had a large crowd with them and almost every group interacted with the crowd by handing out candy or some such thing. We came home with flags, coupons, magnetic clips and even packets of orange Kool-Aid with directions to create Kool Aid playdough from Lansing Charter Academy and Windmere Park Charter Academy. The New Citizens Press Community Action Network Inc. and its Stop the Violence campaign which also partnered up with Mike Karl and The Homeless Angels had over 125 in their group. As they passed by it was hard not to join in with their encouragement to “Keep the peace, stop the violence”.  Within their midst was Yvonne LaFave and her Go Green Trikes carrying  the Quality Dairy (Pine St.) water donation to keep the group hydrated. They later donated the remaining water to Livity Inc which is a nonprofit fighting to rid the Capital city of poverty and hunger.  These types of activities are what really make Lansing amazing. 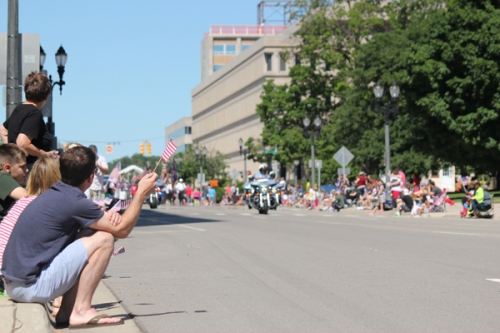 In 2012 we came into Lansing late and our normal spot was full. We then decided to park in Old Town and walk to our normal location by the Lansing City Market. I’m not sure if it was the heat or something else but there was a strange feeling to this night. It seemed there were large groups of people who could at any moment cause trouble. Many of the members of the groups were visibly intoxicated.  At one point we thought we even heard a gunshot. Although we were walking quite fast we were unable to fully make it to our desired location. As the first fireworks began to light up the sky we found ourselves stuck under the Shiawassee St. Bridge.  The photography from this location was terrible. We then decided to go onto the bridge.  Again we found ourselves in the middle of two separate groups, sizing each other up. At one point the mayor and Capt. Daryl Green raced to where we were standing, dramatically looked around and then took off in a car. Once we got home to safety it came to our attention that someone had been shot very near to where we were at. The whole situation left me feeling unsure about ever returning to watch fireworks in Lansing. 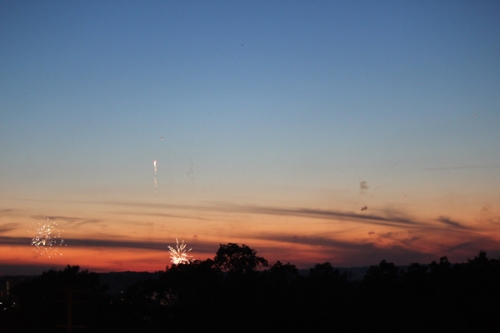 However after a year off I was willing to try again. Our original idea for this year’s Fourth of July was to attend the Lugnuts game. This would provide the safety needed to feel comfortable in the city, enjoy some baseball and be in the perfect spot for fireworks. Then again you can wait too long and not be able to get tickets. The next idea was to just find the perfect photographic location so I can get some good shots. With this in mind we headed to the top of Sparrow Hospital parking ramp. We had parked on the top-level a few months ago and found that the view was phenomenal.  We honestly didn’t even know if we could park there but as we drove in we found ourselves in a small parade heading into the ramp. We parked lower down for a fast get away and began our hike up 5 levels of stairs. At the top we found a very large group of people waiting for the light show. There were numerous security folks keeping the peace and all in all a family friendly environment. And as I had thought, the view was spectacular. We enjoyed watching the panoramic view of the horizon as consumer level explosions shot into the sky. It was great for people/car watching as well. We quickly settled in at a space by the wall so I could take photos and the kids took out the chairs and the bucket of popcorn I’d made just before leaving. Just after 10:00 p.m. the first city display shot off. This was the perfect spot! 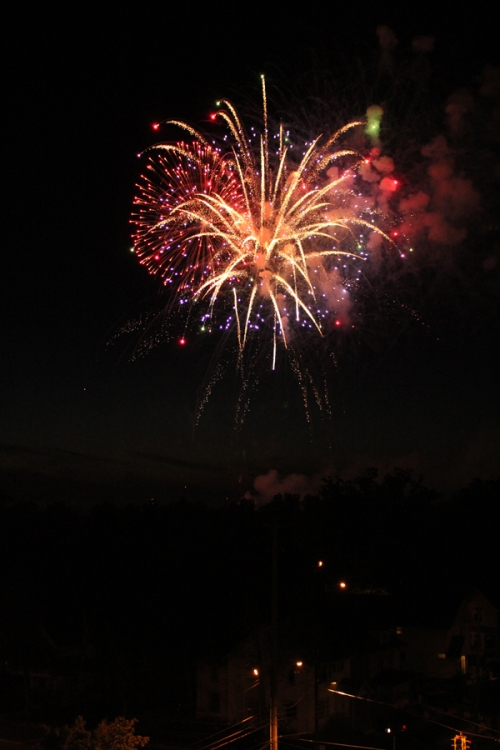 The show was great. Then we waited patiently for the Lugnuts game to finish, their lights shut off and their fireworks to begin. And we waited. And we waited. I started texting people I knew were at the game and found that at the bottom of the 14th there was still no score. 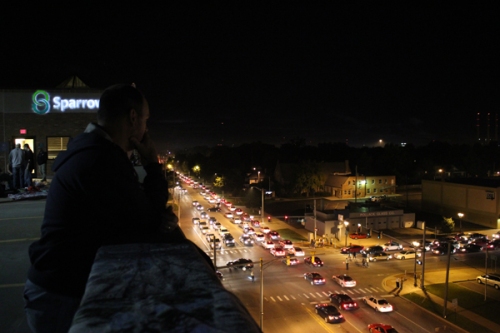 The cars leaving after the city fireworks
© Ariniko Artistry

From our eagle eye location we could see the traffic and decided we would wait the game out. Forty minutes later the news came in via Facebook that the Lugnuts had won. The lights went out over the stadium and we sat through a second fireworks display. It was a gorgeous night and even though those fireworks were farther away there was something really memorable about seeing the moon resting to the south of the Lansing downtown skyline and the baseball game fireworks filling the sky to the north. 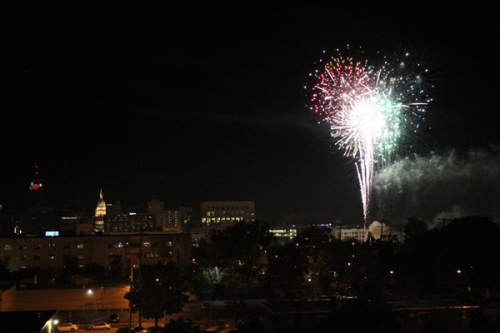 By the end of those fireworks the traffic was flowing smoothly and we had no trouble getting home. As we pulled into our driveway we were greeted by nature’s own fireworks; millions of fireflies flitting and glowing all over the tree line. This was really the perfect ending to a perfect day of celebrating our independence.