On a cool Mid-Michigan morning in early April 2011, I met my second news anchor in person. I had contacted Evan Pinsonnault of WLNS Channel 6 news when he put out a request for cool things happening in Lansing for his Tell Me Something Good Segment. He quickly responded to the email I sent and within the week he was joining me for one of my Saunters. He brought a camera man and they put together this lovely video. It was one of the greatest days of my walking adventure and I wrote this blog about it. After that moment I’ve had a handful of run ins with Evan; Common Ground Film Festival, Blues Festival, The Red Nose Rukus party and Ye Old Christmas. It seemed we attended quite a few of the same events and every time he saw me there, he walked straight to me, hugged me, said he was glad to see me and took time to ask how I was doing. Every time. To this day it amazes me. I’ve had folks from the Lansing community that I have photographed and been introduced to over 20 times who still have no idea who I am.

Evan judges Ye Old Christmas gingerbread house competition. I was the photographer for this event. 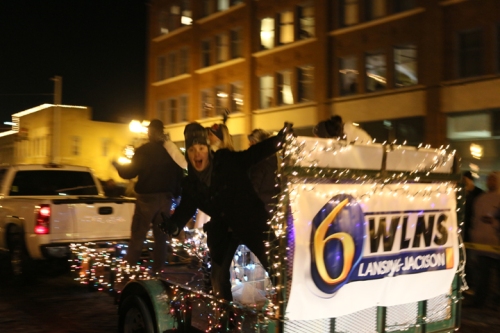 Evan on the WLNS float during Silverbells

When my City Saunter project came to a completion Evan tried desperately to get me on his broadcast again. Unfortunately it didn’t work out.

Then came the news that he was moving to California. I wasn’t surprised. He had mentioned to me before that he had hopes to move to a new location. Although I feel he will be greatly missed in Lansing, I am very excited for him.

Through communication on Facebook he suggested I come onto his Feel Good February segment to do a re-cap of the City Saunter Project, how I completed it and what I’m up to now. I, of course, said YES!

This morning I woke up bright and early, 4:45 a.m., to arrive at the station by 5:45 a.m. I’ve been to a few news stations to be interviewed for this project before but am always intrigued with the functionality of each. I was ushered to the “green room” which was really the computer offices of all the staff. One wall held at least 6 televisions all broadcasting different stations and news updates as well as the live broadcast. It was quite fascinating. I entered just as the clip showing me came on. There is something a bit surreal when you walk into a news station and you are on the news. One of the employees says, “Hey that’s you.”

I was offered a cup of coffee and told Evan would be in soon. The other anchor, Chivon, came in and we talked for a few minutes.

When the live broadcast switched to local commercials I knew Evan would be in soon. When he did come in,  just like always he came straight to me, arms spread for his perfected hug, warmly saying, “Hello my dear!” 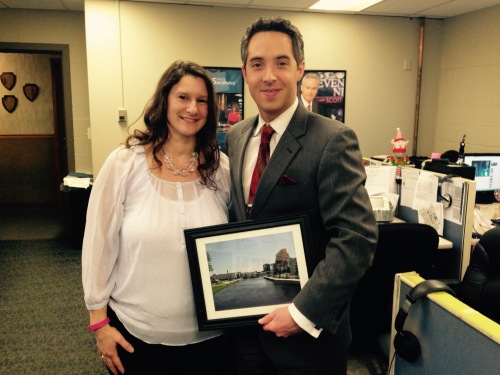 I gave Evan this photo to remind him of Lansing while he continues his journey. I hope he will always remember his time here fondly.

I sort of don’t remember the interview. I know we talked about City Saunter. I know we plugged AA Creative Corridor. I know we plugged my Ariniko Artistry photography, I know I was so nervous and didn’t know where to look. Luckily Evan asked all the right questions and prodded me along when I need it.

It’s a bit sad thinking that these meet ups won’t happen again. Maybe I’ll write a City Saunter book and have him arrange a book signing in California!

A girl can dream, right?