It’s spring here in Lansing. The flowers are blooming, the birds are flitting through the air chasing after each other; passion is in the air. Today I found some of that passion. However, it wasn’t the type that involves red roses and boxes of candy. It’s the type of passion found in a person who has determined that he is incomplete unless he is doing the thing he loves. In this instance I found a whole group of them working together, creating a dream out of their collaborative passion. As I made me way up Grand River in Old Town I could see the group, neatly staged in the outer lane of Artie’s Filling Station. Today they are shooting their 5th day out of a nine day schedule. After shooting they will edit their work to create an 80 minute feature. It will take roughly 2 to 2 1/2 years to have this film ready for the public. This is the fourth feature that Michael McCallum of Rebel Pictures, A.E. Griffin of UnSAFE Film Office and Jonathon Worful of Vernacular Films have created together. After all this time (Michael and A.E. have created over 30 films together), they work well together, like a choreographed Fred and Ginger number. They move together in a synchronized motion, finish each other’s sentences and create award winning movies together. In 2010 A.E. was named “Michigan Filmmaker of the Year” by Muskegon Film Festival and this year Michael was named “Michigan Independent Film Maker of the Year” at the 3rd annual Michigan Film Awards. That’s just the beginning of the awards won. Their process is simple: fast shoots, small group of dedicated workers, including family if need be and they’re really good, fundraisers and day jobs to fund it and a small town that eagerly hosts their projects. Yesterday the crew was set up at Golden Harvest, another locally owned and admired hole in the wall. Today it was Artie’s Filling Station. When John Miller, owner of Artie’s, was first approached he admittedly wasn’t sure, since he recently opened seven weeks earlier and didn’t want to deter customers. Then Michael came out and the two chatted. Sometimes ideas just seem to meld together. John not only wishes to serve up the best coffee in town but he also wants to expand the Artie’s experience with a live music show. Jazz & Joe would commence every Saturday in the very spot Michael’s crew was set up. It was the perfect test drive. 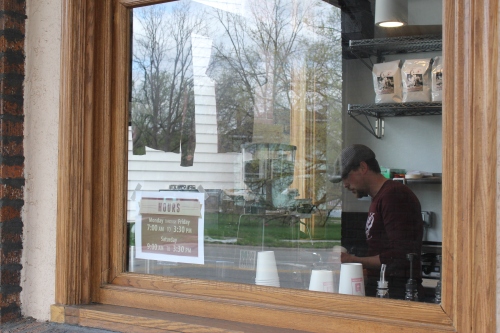 The thick clouds begin to part and the gusty wind starts to die down. “Sun”, someone casually states. Then another, more urgent this time, “Sun!” Quickly the reflector is grabbed, the light meter is positioned, and Michael’s father, William C. McCallum, star of this feature, is put into his position. Everyone is in position. It’s a moody scene with some swearing. The gruff, bearded actor is not happy about something. But the warm, not used to such a long, itchy bearded father of the director/producer has a coffee from Artie’s and a love for what he is doing. The theme of this feature, Buffalo, is regret and redemption. After talking with this small group of entrepreneurial artists, I can confidently state that regret is something these guys will not have. They’ve all struggled to make their dreams come true. They all love what they do, from making movies to opening a drive up coffee shop, and it shows.
Spring in Lansing begins the active festival season. In the next two weeks we get to experience the second Capital Area Film Festival. It is being paired up with the third TEDx Lansing. As the photographic coordinator of both I feel obligated to bring attention to these exciting events. Each on their own offers a great opportunity for individuals to experience a talk or movie that they might not get to without the event. This year A.E. Griffin’s The Girl with Blue Eyes will be shown at the CCFF. It stars Michael and A.E. won best editing at the Uptown Film Festival for it. April 13 is TEDx Lansing and the beginning day of the Capital City Film Festival which runs until April 15. Be a part of Lansing’s first significant events of the year. You won’t regret it.